Are you seeing the most darling images of Winnie the Pooh lately???  I am just loving them!  I decided to hop on to a Winnie the Pooh Blog Hop : )
The Blog Hop was the brainchild of Crystal Minkler, her blog is Tawny Owl Paperie. SHe is a Blogger, a You Tuber and she is also on Instagram @crystalominkler 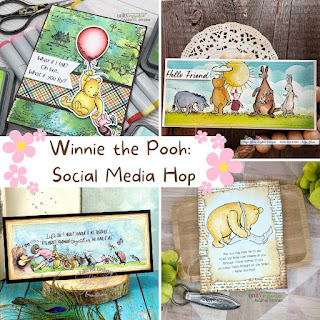 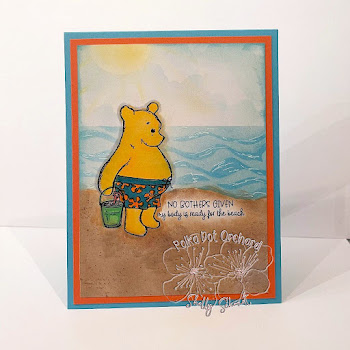 I loved this sweet beach Winnie!  No Bothers : )  Beach ready- I am about as beach ready as Winnie here : )   This image is from a digital set from Polka Dot Orchard digi stamps called Summer and Hunny.
I used Distress Oxide inks and did some masking and some stenciling and colored using Copic markers. 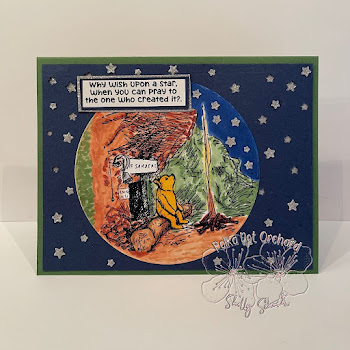 From daytime to night, I just love this image and sentiment too. This set is also from Polka Dot Orchard and is a digital stamp set. This set is called My Favorite Thought
I know the colors are not exactly the same, but I like the way this came out,  The image was die cut and I used a Gina Marie die for the sky.  I cut out extra silver shimmery stars and added them to the background . I just love the sentiment too.
Nothing better than summer with beach days when the sun is out and starry skies when the sun goes down!
The next stop on this hop is Rebekah's Blog
If you get lost, check back to Crystals Blog Here: https://crystalominkler.blogspot.com/2022/07/winnie-pooh-social-media-hop.html
#winniethepoohhop The hop is on Blogger and also there is an entire set of creative folks on Instagram posting images as well. That hop begins at @crystalominkler
****I have a stencil set to give away to one blog hopper- its the cloud stencil I used in the first card which is from A Colorful Life. It will be a random draw from anyone who leaves a comment on my post- stating, " I love that cloud stencil and would love to have it:!!! I will also include a $5.00 gift card to Polka Dot Orchard digital stamps- which is the sale price of the Pooh images in her store presently!
Enjoy the Hop!
Thanks for stopping by!
Shelly
Posted by Shelly Schmidt at Saturday, July 16, 2022

These are both so super cute!!!

Such cute cards! I love Pooh at the beach! That’s my kinda Pooh!

These are great! I love that beach bunny, er bear. I love that cloud stencil and would love to have it:!!! I've been seeing that stencil used in a few cards lately and was thinking that I need to add that to my supplies. I also love the nighttime scene on the second card. Great ideas!

These are both such cute cards! I love that cloud stencil and would love to have it:!!! Winnie the Pooh brings back lots of good memories of my nine kids' childhoods :)

Adorable Pooh cards Shelly! I especially like the one on the beach...who knew he loved to hang out there.

So adorable. Love Pooh on the beach!

These Winnie cards are absolutely adorable!

Adorable cards, Shelly!! I just love the scene you created for Pooh! Too cute!! And the starry sky for your second card is perfect!

both so sweet! love pooh at the beach! super fun!

What fun cards Shelly! I couldn't resist the sweet lil' beach Pooh too!
" I love that cloud stencil and would love to have it:!!!"....How sweet of you to offer a giveaway! I'll have to remember that for next time!!

Hey there Shelly...love these to pieces. Don't you just love PDO digis!?! Your night sky one is amazing, but I love them both.

"No Bothers given", I LOVE it, lol 🤣
Love your scenes with Pooh...Great cards! ♥️