What says Christmas more than the aromas of baking in the kitchen filling the house???  This is a new release at Jan's Digital Stamps called Sugar 'n Spice. 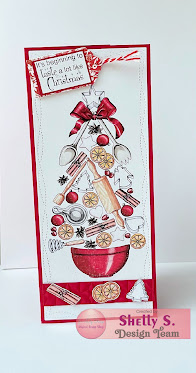 I found this to be a fun image and could imagine the smells and delicious tastes that come along with the season.  I made a slimline card. I used the pre-colored image on this card, and used a few of the smaller image- I added them on an embossed piece of the red cardstock. The sentiment was added as a tag and DP and twine was also used.
The dies used- Gina Marie and the 3D embossing folder Simon Says Stamps, aka SSS.
Challenges:
Addicted to Stamps and More- Christmas
Holly and Ivy Christmas Challenge- AG
Thanks for stopping by!
Shelly
Posted by Shelly Schmidt at Monday, July 04, 2022

Shelly, this is a wonderful card. I love the slimline design and the coloring is fantastic. Thanks for another lovely team project for the challenge at Jan's Digi Stamps.
Donna
Admin for Jan's Digi Stamps Challenges

Shelly, this is a fun image and your coloring is great! Awesome card!

Love the way you have used this fun image Shelly - and a great way to make a quick card with the pre-coloured image :)
Blessings
Maxine

Shelly, Thank you for sharing your Tasteful slimline with others.
Hugs,
Jan

What a great take on Christmas!! Congratulations for being selected as winner of the week over on Addicted to Stamps and More!!