Happy Blog-versary in Creative Rumblings land!!!
I have been so Blessed in the past year meeting and getting inspired by so many people on the internet!  Plus, I have been really lucky and have won a TON of Blog candies- so I felt it would be fun to Pay it Forward!
Now, I ran into a little issue I did not think about- people made a comment for the candy, and listed the sidebar posting all in one, and others posted a comment with the person that referred them as well…so instead of using random number generator, I had to write out all of the names, links and referrals and put them all in a bowl…….there are over 100-Wow! 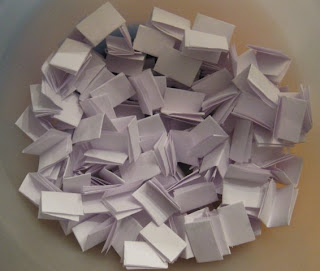 
Please contact me in the next 48 hours with your mailing address @ Shellymc2 at Comcast dot net
Thanks again to everyone who joined in my celebration!
Shelly

PS- I wanted to tell you about a BLOG Ruth told me about- BLOG CANDY
It looks fairly new but my candy was posted there today- so wanted to pass it on.
Posted by Shelly Schmidt at Saturday, July 17, 2010

Thanks so very much!! I can't believe you drew my name. You've really made my day :)

WOW! This has made My day.Thank you so much.

And yeah, Blog Candy was started yesterday... so REALLY new :D (I'm looking for folks willing to help with posts!)

I left a comment yesterday, but it has not shown up yet. Maybe I did something wrong. So I will try again.
This is so great that you drew my name. I am so looking forward to playing with new goodies.
Thank you so much for offering such great blog candy.
Theresa in Kitimat

HI there..I just saw a list of the winners..And there is a Regina on there..I spell my name Regena..I went thru all ur comments and I could only find one Regena..so Im wondering if its me or a differnt one

oooh, bummer! I missed out on the fun! Between birthday party for my mom and nasty weather in our town I never got a chance to peek and claim, but congrats to the new winners...I'm sure they LOVE their goodies!!!

Hope you have another great year of blogging!!