Dueling Dazzlers- 'Its all a buzz;!!!

Were all a buzz with the July challenge- the Dazzlers hostess is Terry A /Terry S for the Diva's.
The kit was so fun that I made 2 cards : ) 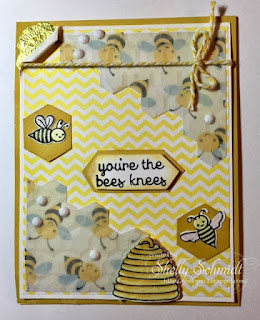 This card is so much prettier IRL! The flowers are a vellum overlay and it is over black/white DP. 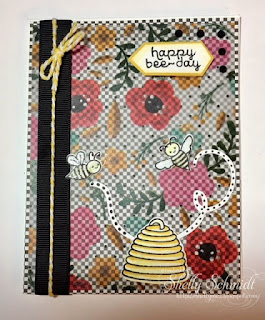 Did you know that the greatest threat to bees in North America today is Colony Collapse Disorder (CCD)?  This is where entire hive of bees suddenly disappear.  In the early 2000s there was a sharp increase, especially in North American.  There is still uncertainty about the cause or causes of CCD;  disease, mites, increased use of neonicotinoid pesticides and fungal infections are all possibilities.  There are often multiple stressors, none of which is lethal enough by itself, but the combination is too much for the bees.The annual failure rate of honeybee colonies averages around 30% in North America.  Honeybee losses are potentially devastating economically since bee pollination is vital to at least one-third of crops worldwide.

Be sure to hop along and see what the other Dazzlers- my team, and the Diva's have made!


Thanks for stopping by!
Shelly
Posted by Shelly Schmidt at Sunday, July 15, 2018

Great use of the vellum! These are both very pretty!

Both cards are beautiful. Loved the challenge this month.

Wonderful cards, Shelly! I love your use of the vellum and the pretty papers shining through - BEEutiful!

Shelly these are great cards. Such different uses of the stamp.

Wonderful cards, Shelly! I love how you used the papers. I have to make another card because I want to use that velum overlay too. Love them both. My computer went to the shop yesterday so I am using my hubby's computer. Sharing computers is not our specialty. LOL! So I have to comment when he isn't around. Hoping it's an easy fix. You are right. I am busier now than I was when I worked. Thanks for sharing your lovely creations!

Shelly, both of your cards are amazing! I love that they are so unique... they don't look a bit alike. (I fear my card-making gets in a rut). Awesome job with the BEES duel!

Shelly--both of these cards are so pretty. Both so different and special! Great Job this month!

What sensational cards, Shelly! My clogging instructor is now a bee keeper so I am learning all about bees and clogging at the same time!!

Oh my goodness Shelly two cards and each as wonderful as the other. You did an outstanding job on your kit. I love both of your cards....

Two gorgeous cards Shelly, I love the use of the vellum and all of the adorable bees!

Two cards! You rocked this kit. I just love all of the kit embellies you used. Thanks, for sharing!