I found a fabulous digi that was perfect for my husband's Fathers Day card at Create with TLC.  I paired the image with a background from the Technique Junkies called Colorwash Alcohol. 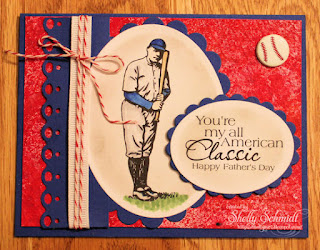 I colored the image lightly with Copics (and we are in the Chicago Cubs territory......) and used Red and Brilliant Blue colors with a splash of white.  I sponged Gray ink on the image and sentiment.

My husband plays baseball on an over 50's league. The team played on Saturday, and he had a huge thrill- Randy Hundley came- he was the catcher for the Chicago Cubs in the late 60's and in the 70's. 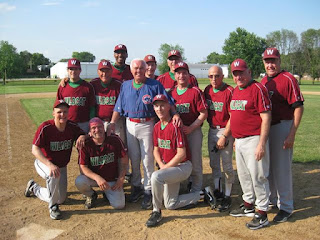 My husband- Ray- is just below and to the Right of Randy- kneeling. They had an exciting game- and Mr Hundley was the coach for the day- they pulled out a win from behind at the end of the game!

Challenges:
365 Cards- Day 163- Father
613 Avenue Create- Anything Goes- option "Something Special for a Male"
Sentimental Sundays- Paints, Sprays or Mists - used my sprays : )
Catered Crop- For the Boys
Creative Inspirations Paint- Red/White/Blue
One Stitch at a Time- Use a Digi
PanPastel- Male theme
2 Sisters- Dad
Gem of a Challenge- Male/Fathers Day
Crafters Cafe- Male
Cut it Up- Use Die Cuts and R/W/B
Digi Haven- Anything Goes
Simply Create Too- Masculine

Thanks for stopping by! Shelly
Posted by Shelly Schmidt at Monday, June 17, 2013

What a fabulous card Shelly - isn't it wonderful when we can make a card perfect for the recipient.
Blessings
Maxine

Cut It Up Challenge Blog said...

What a fantastic experience for your husband!
Beautiful image, and great card. Thanks for joining us at Cut it Up Challenges!
Evelyn
http://mylittlecraftblog.wordpress.com

Awesome card! Love that image. Thanks for playing along at Cut It Up Challenges! ~Tami

Love your card Shelley I am in love with the layout of the whole thing. Thanks for joining us at CI Paints.

Shelly, this is sensational!!! Love the image, baseball, and everything else! Perfect image for a card for your husband.
How awesome to have that famous baseball player come play and coach the guys. Know they were very excited and thrilled!
Lynn

Such a BEAUTIFUL card!!Love it!
Thank you for joining us at Cut It Up Challenges.
Have a wonderful day,
Migdalia
♥ Crafting With Creative M ♥
♥ 2 Creative Chicks ♥
♥ Silhouette Challenges ♥

Thanks for joining us at One Stitch at a Time this week, and good luck!

What a fun day for your hubby! :^) And what a great card for him, too! Love the image, sentiment, design & colors! Great background, too! :^)
Hugs, Penny

Love your card! Thanks for sharing with us at 365 Cards!

I love this image and this card. I am going after the image at TLC. I love baseball, my Dad loved baseball and it has always been part of our lives. Your background is fabulous, love how you designed your card. It is truly awesome.

Gorgeous creation! Thanks for joining at Digi Haven: Anything Goes One Year Anniversary
Hugs
Dewi

Wonderful creation! Thanks so much for playing with us at 613 Avenue Create!
Hugz,
Chana, Owner

Oh Shelly, this is an awesome card!!!
Fabulous background technique!! Thanks for joining us at Sentimental Sundays, this week.

This is wonderful great tribute to the hubs
Thank you for joining us at Creative inspiration paints.
CI design team member
DIANA L.
dianamlarson.blogspot.com

Shelly, this is perfect! W hat a great card for the dh - and love how it matches the colors of the photo! Beautifully colored :)

This is fantastic!! Awesome card!! Thanks so much for playing along with us at One Stitch At A Time!!! Good Luck! I hope I see you again for our next challenge :)

Fabulous male card, the sentiment and image work beautifully together, thank you for joining in with the PanPastel UK Challenge blog
Lindsay xx

Fantastic Father's Day card!! Thanks for joining us at CI Paints for the Inspired by Challenge!!