Use a napkin please!

I started out to make an interactive card, and I had a fail, so played around and used the Sunday Featured Stamper at SCS as a Mojo/ idea stimulator.....  I picked THIS card, where the scripture or sentiment was really the main focus. 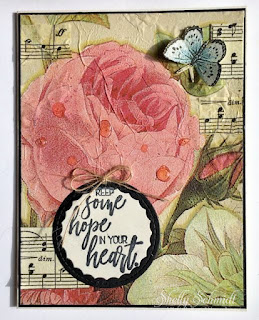 Thanks for stopping by!
Shelly
Posted by Shelly Schmidt at Sunday, April 07, 2019

This has a Victorian feel to it. Great placement of images. I really need to think about using some adorable owl napkins I have on hand. Never used them before. Thanks for the inspiration.

Gee, I haven't done a napkin card in a long time. This is a beauty! Love the flower and the butterfly. Hope you have a wonderful week!

This is so gorgeous!! I love the beautiful napkin you used!! Have a great day!! Big hugs :)

What a beauty!! I love this awesome card, Shelly!