Yes, more Falliday, but I thought I had better find a new title...... 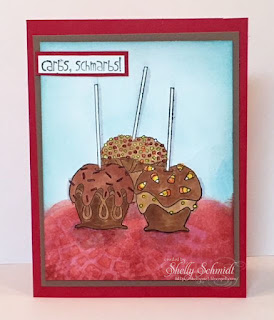 This challenge called for Masking.  I stamped this fun image by Impression Obsession, masked it and colored around it with Distress Inks.  For the bottom portion, I applied the color, then laid a stencil on it that had been spritzed with water.  The image is colored with Copics. The sentiment is SU- I used just 1/2 of the sentiment. 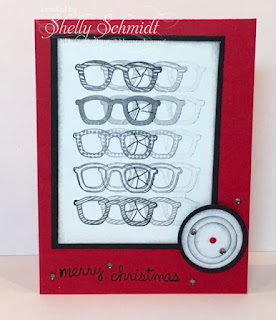 So, this challenge was to use the movie, A Christmas Story as the theme.  Well, my son asks for bullets for his Christmas gift.....  he is a nature buff, so although I am not the biggrest fan of guns, guess if he encounters a bear or a mountain lion he is safer with one than without.
I thought the Unity image if glasses with the lens cracked would be a fun idea.  The gems are supposed to mimic bullets on a target.  I am not sure he will get it though......  we'll see.  The sentiment is by Lawn Fawn. 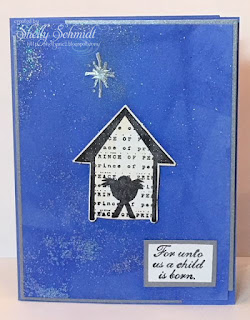 And, finally a card I made for the SCS Featured Stamper- Jeanette aka Forest Ranger who is a blogging friend!  Wahoo Jeanette!  Jeanette has also been a Unity girl, and inspired me to purchase a few Unity stamps : )  This is one of those stamp sets from Unity  CAS and powerful!

Thanks for stopping by!
Shelly
Posted by Shelly Schmidt at Tuesday, October 24, 2017

These are awesome! The candy apples looks yummy and I love the background on the Christmas card. Very pretty!

Great cards Shelly - love the nativity one in particular - it's stunning.
Blessings
Maxine

Shelly, you have been busy...wow. Those are all gorgeous!!!

Delightful cards, Shelly!! I am feeling some special "love" for the carbs!!