The Michael Strong Yahoo Group is having an "Owl' themed blog hop. I used the NEW Whimsical Owl set that has just been released.  How did you like Michael's Blue Owl?
OK- my silly side came out- and since it is Superbowl Sunday, I had to make a card with a football theme. 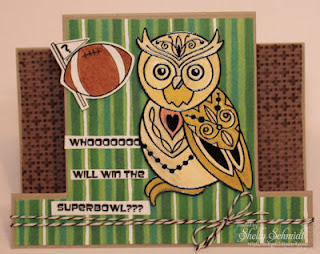 So, Whoooooooo do you think will win the Superbowl???  Well, it's not my home team (the Chicago Bears), so I am looking forward to seeing the commercials and hoping it is a good game : )
I stamped and embossed the owl image onto Cryogen White cardstock. I colored the image with Copic markers. The sentiment is computer generated. The football and flag are from Create with TLC. 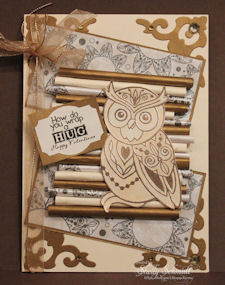 I could not capture the shimmer- at all....The owl was stamped and embossed on Cryogen White cardstock. I colored the image with Copic markers.  I used a *new* Technique Junkies technique (from the new newsletter just out) called rolled backgrounds. I used an Ivory (shimmery) cardstock, a Copper metallic cardstock and Cryogen White text weight cardstock all from Paper Temptress.
The image on the Shimmery layer under the rolled layer is a freebie Michael gave us recently- you can find it HERE on his blog- from the Dec 29th post.  The Sizzix corner dies were cut out in the Copper metallic cardstock and gold Bo Bunny rhinestones were added. The sentiment is by Create with TLC.

There are ten blogs in this hop- and one lucky commenter will be randomly chosen to WIN the Michael Strong Whimsical Owl stamp set.  The winner will be announced next Sunday, Feb 10th on Hetty's Blog.

*Bev* is the next stop on the hop.  (It is a circular blog hop, so there is no beginning or end- just keep going till you are back at the first blog you visited).

FYI: The Yahoo group is :  Michael Strong yahoogroup If you own any of the Michael Strong stamps- come join us! There is daily inspiration provided by a volunteer card captain and monthly challenges!

Thanks for stopping by! I hope you enjoyed all of the fun ideas on the blog hop!
Shelly
Posted by Shelly Schmidt at Sunday, February 03, 2013

Shelly, both your cards are just great. I love that super bowl idea for today! Wow it is going to be a great day in America. Have fun. And that metallic card is just ma taste. Love those rolls behind the owl. Thanks for taking part in the blog hop.

I like both of your cards, but the 2nd one me like very very much.
Heard something on TV about the Superbowl event...enjoy it!

Both of your cards are 'super'. Love the whimisical superbowl one and am sure the other is so beautiful in person from the description of the great papers you used. The paper rolls are a neat idea and make a nice background for the owl - thanks for sharing !

Fabulous card Shelly, and that rolled background is a stunner!
Blessings
Maxine

Great cards Shelly. Owl have to say I do like the rolled backgound on the second card. Your Superbowl card is a real hoot!

Both cards are fabulous Shelly, I love this owl image.
Kevin xx

Your cards are both so beautiful!

I like the 2nd card best but my husband likes the 1st. football fan

Wonderful cards! I love the technique used in the second card. I may need to join the Technique Junkies. Everyone shows such wonderful techniques from them.

Both cards are 'super'. The metallic card is so pretty - love that touch. Thanks for sharing.

These cards are gorgeous, Shelly. Love the way you designed both and all elements you used and also the owl is just brilliant.
Michaela xx

Now this is seriously creative, Shelly! What a fun card!

2 cards that are so different -- what a fun card for the superbowl and the other is so beautiful!

Both card are very beautiful. The second is my favorite! Beautiful colors.

a super bowl card, what a great idea! Love them both.

Happy Super Bowl Sunday my friend!! I certainly can relate to being a Chicago Bears fan!! :) So I'm not pressed in picking a team, but I do love your card with fun sentiment!! Your second card is gorgeous with the layout design and colors!! Thanks for sharing these!! HUGS :)

Love both of your owl cards, Shelly. :^) The first card is a great idea for Super Bowl Sunday! So cute! And the second is so pretty with that shimmery paper--love that design & die cut corners! :^)
Hugs, Penny

Hi Shelly . Your football card is so appropriate for today . I love the background for the metallic card. Both projects are great. TFS

Love both of your cards. Cryogen white is one of my favorite papers and I use it a lot. I like the technique you used with the rolled papers.

Your cards are lovely and although I have never understood your version of football I do understand what a big event the Superbowl is
I love your second card - such lovely, suitable colours,

Shelly, both of these just put a smile on my face with that image!!! CUTE and wonderful.
Lynn

Your card of the Superbowl is very funny, Shelly.
But I like your second card best!
To me it looks like the wise owl is sitting on top of a pile of books. ;-)

Very timely card and cute. Owl be watching anything but the super bowl.

Lovely cards you have done. Especially love the brown one. Stunning design and colours. Thanks for visiting me.
Love n hugs
Marie

Shelly love both of your cards. The first one is so cute and funny and the second one is stunning. Love the colors and layout of your second one.Thanks for sharing.

Oh what a fun card! I'm taking a break from watching the Superbowl to see the bloghop posts!!! I love your football theme! Some lucky sports person would LOVE to get your card!!! Hugs, Laura

Love the football card. So cute.

Amazing cards, Shelly! Love them both, but if I had to pick a fav it would be the second one. Great rolling technique and I bet it's stunning IRL - all the shimmery CS and copper and gold accents! It's a fantastic image too. Kudos!

Love both of the cards, Shelly, but I'm especially taken with the second one done in all neutral shades. WOW!

This is my favorite football card ever!! LOVE IT!!

Shelly, Love the little owl, super cute cards. And I love the step fold one it's perfect for the Ball game. BTW I was going for the niners :(

I guess you need a Michael Strong Raven now. ;)

Love the texture and shine you have in that second card!

Love both cards but esp the second one. Subtle colouring but so effective. WendyC

Nice to use the Super Bowl Sunday as a theme at your first card.
Love the background and colours of your second card!
Greetings, Yvon

They are fun cards - love the superbowl one and enjoyed your use of a new technique in the second card. Great ideas.
Anne