McMahon Five Designs New Releases are now going to be released on Fridays......

I used the Willow Sketchie sketch challenge for my card today- I used a fun image for a child's Birthday card: 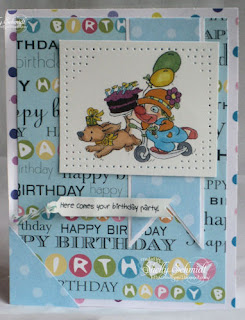 I had a blast coloring this image called You're Birthday has arrived with alot of bright colors with my Copic Markers. I used a technique I saw on Pintrest to make the sentiment shape- I punched an elongated tag with the SU tag punch which is like an inch long...... then I added some Baker's Twine through the end of it.

My second card uses the Outlawz Wednesday Sketch challenge. You have to join Outlawz to join in, but there is alot there to see/check out/ join in! 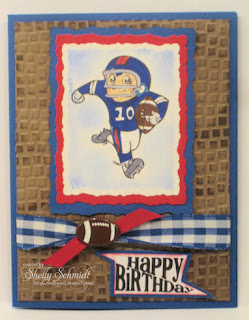 Do you know any { BOYS} that love football?  I have so many Birthdays in March and I know a boy who loves Eli Manning- so this new football  image from M5D is Perfect for him it is by D'Amore Allure. The sentiment is from Create with TLC.

McMahon Five has a weekly newsletter, and it frequently has coupon codes- simply stop by the blog to sign up- HERE.

Thanks for stopping by!
Shelly
Posted by Shelly Schmidt at Friday, March 23, 2012

Shelly, these are both just adorable! The Birthday Clown rushing in the balloons and cake is so sweet. Love the piercing and the extra long tag on that card.
The football birthday card is perfect for boys or men! I love those little Happy Birthday pennets too.

This is such a great child's birthday card Shelly, fab image and I love all the little details.
Thank you for joining us at Willow Sketchie this week.
Pauline
x

Oh these are both lovely, what great cards, thanks for sharing with us on Willow Sketchie this week, Love Hazelxox

Thank you for sharing with us at Willow Sketchie this week, good luck!
Hugs Shell xx

those are so so so cute specially I love the first sky blue color combination, and the image is just adorable.

Such a fun bright happy card.Great work with the sketch.Thanks for joining us at Willow Sketchie Challenge.Hope to see you again next week :D
Lisa x

A lovely creation so bright and perfect for a birthday.

Thanks for sharing at this weeks wsc, Kelly x