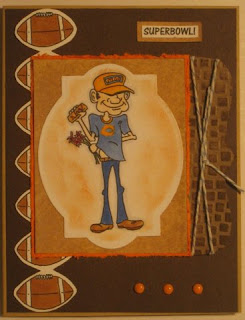 The image is a freebie (for the color challenge) at CDAC HERE... for two weeks and it is from BoniBleaux Designs. The football is also from BoniBleaux designs, and I just copied and pasted it repeatedly for my border strip.  My husband and son got involved in what the flowers are for, and decided the dude would be asking permission to go somewhere special, like the Superbowl.....!
I enjoy watching a game of football, but if I got invited to go to the Superbowl, I would feel like the ticket SHOULD go to some poor soul who LOVES, LOVES, LOVES football......I would say go for it and bring a friend, and I would spend the entire time they were away Paper Crafting!
The image is colored with Copic Markers. The cardstock behind the main image is shimmery and is a Technique Junkies technique called Dabbed Shimmers. I distressed the orange layer, then added a Cuttlebug Highlight layer.
We have a friend that told his 22 year old daughter that he would pay for her to go to the Superbowl if the Chicago Bears make it there....... my son does not think the Bears have a chance to go......I will be watching each week to see how that goes...... I do not make such promises to my kids- that $$$ could buy a ton of stamping supplies, don't you think???
I got side tracked with the football theme and the browns, and lost sight of the color challenge for CDAC- Oh well.......

this turned out cute. I love the row of footballs. Great manly card.

You are so right to never make $$$ promises you might have to pay up on and forsake the craft supplies! I think the dude is buttering up someone for something and you have made him impossible to say no to! Have a great week!

Shelly, he's a "DOLL"! Love how you did those little footballs and need you to teach me how to do that! Wonderful card.
Lynn

It's an interesting card - I still don't know who would get it in the mail, but I like a lot of the details, like the faux croc paper and the column of footballs.

Ha!! Too funny. I love how part of his shirt is up, exposing part of hs belly on the side! To cute girly and perfect for this season of football craziness. I don't watch it at all.
Have a blessed week and thanks for you prayers!
Melisa

Popped over from FP - thanks for sharing your lovely creations - so many gorgeous cards to look at!

Such a sweet looking card. Love the guy card!;)
Found you via Feline Playful game.
i have added my name to your followers
hugs
Claudia

Great card for a guy. I thought the same thing as your DH, he needs to bribe the wife so he can go to the big game, lol. The row of footballs is a cool accent.

Hi Shelley! :) I really adore your card!! So fun and masculine!! My boys would love it...especially decorated with their fav team colors!! Hope you're doing well friend!HUGS

Great job on Gary. I love the shimmery background and your football border!

Cute card Shelly, I like all the detail with the footballs.

Hello,
a very beautiful card and a great design.
Thank you for visiting my blog.
I was very happy.
I wish you a Happy New Year.
Hugs Karla

Such a great GUY card - so much fun!

Cute card for the guy in the mancave!

Shelly, cute whether or not it followed the CDAC color challenge. that old geezer looks like he needs to go to the SB!!!